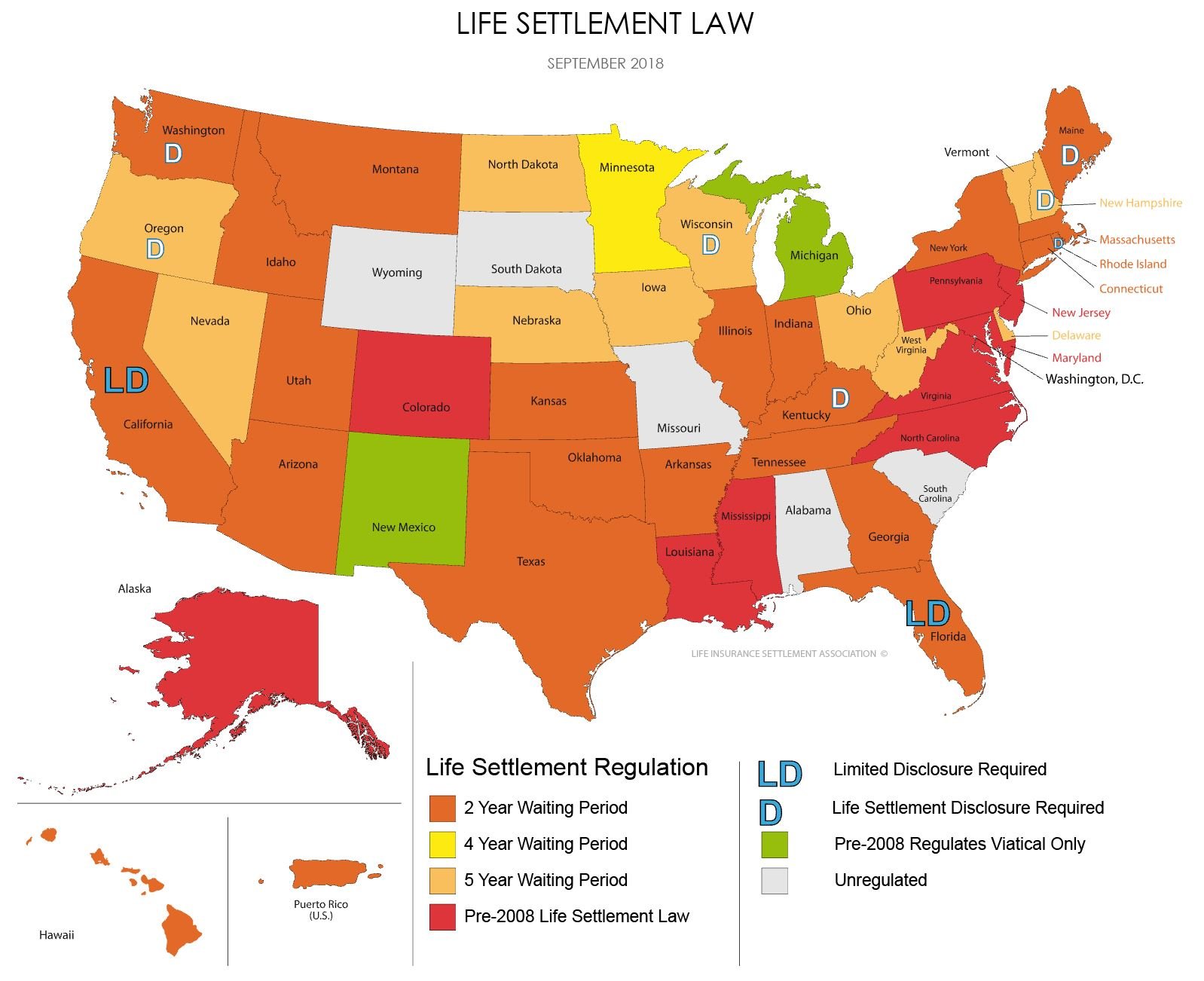 Thirty of the regulated states have a statutorily mandated two-year waiting period before one can sell their life insurance policy, while 11 states have five-year waiting periods and one state, Minnesota, has a four-year waiting period. Most states have provisions within their life settlement acts whereby one can sell their policy before the waiting period if they meet certain criteria (i.e. owner/insured is terminally or chronically ill, divorce, retirement, physical or mental disability, etc.). Twenty of those states follow or very closely follow the National Conference of Insurance Legislators (NCOIL) Life Settlement Model Act, representing almost 53% of the U.S. population. Conversely, 12 states (roughly 12%) have passed a hybrid of the National Association of Insurance Commissioners (NAIC) Viatical Settlements Model and the NCOIL Model, or some variation thereof, or the pure NAIC Viatical Settlements Model Act.

In addition, most states require that consumers receive all offers and counteroffers, alternatives to settlements, and risks related to taxation and government assistance, and also requires the licensing of life settlement brokers and providers and the approval of forms for the life settlement contract, disclosures, and escrow agreements. Likewise, states require life settlement companies to adhere to applicable state and federal privacy laws and submit for approval anti-fraud plans to ensure that the policies they purchase have not been obtained and are not being sold illegally. These highlights ensure that this transaction is one of the most transparent and fully disclosed transactions in the insurance industry.

Since 2007, following the adoption of the NCOIL Life Settlement Model Act which, unlike the NAIC Viatical Settlement Model Act, addresses Stranger-Originated Life Insurance, or STOLI, 29 states have adopted new laws to expressly define and prohibit STOLI. It is important to note that the distinction has been made in many states that life settlements are not STOLI. It is also significant to note that no life settlement company has been accused of violating these anti-STOLI laws by insurance regulators, other law enforcement agencies or other parties.

As further evidence of the growing acceptance of life settlements, in 2010, NCOIL adopted the Life Insurance Consumer Disclosure Model Act.

With the support of insurance commissioners, six states have adopted some form of the Consumer Disclosure Model thus far in Washington, Wisconsin, Oregon, Maine, and Kentucky and New Hampshire. Such consumer-focused regulation should be adopted in every state so that policyowners can maximize the true market value of their life insurance policies, rather than simply turning the policies over to the insurers.

Today, the life settlement market continues to meet the needs of policy owners – focusing on middle-to-low income seniors in need of long-term care and retirement income.  A number of legislators have introduced legislation that would encourage seniors who are about to access Medicaid to be informed about life settlements as a means to assist in paying for long-term care services.

Life settlements are now being endorsed by states as a valuable resource to individuals and governments in addressing the long-term care crisis in America. The ability to keep tens of thousands of individuals off the burgeoning Medicaid rolls, and save Medicaid hundreds of millions of dollars annually is a realization of the life settlement market’s tremendous social benefits and a testimony to the growth and maturity of the market. Thus far, Texas has passed such Medicaid Life Settlement bills, and nine additional states introduced similar bills in 2014, alone.